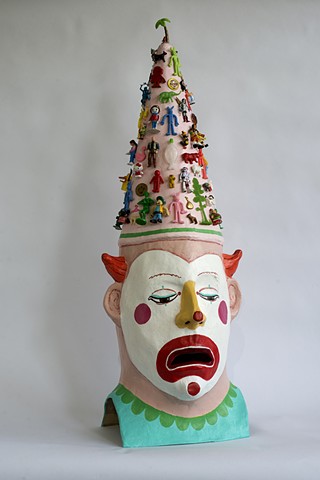 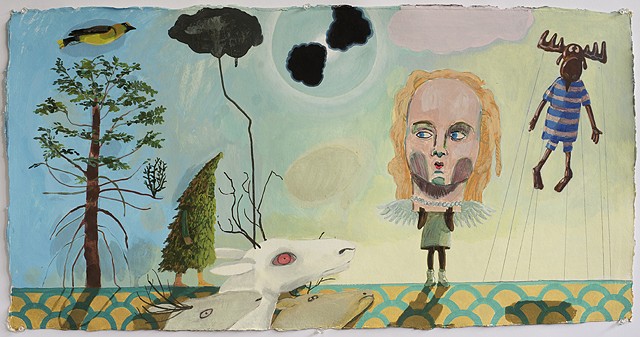 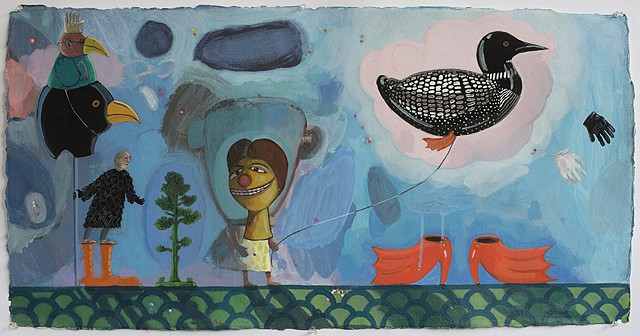 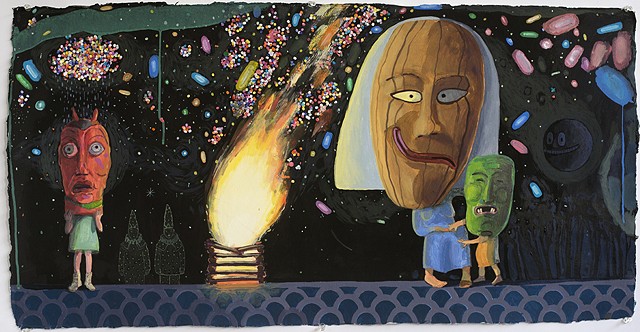 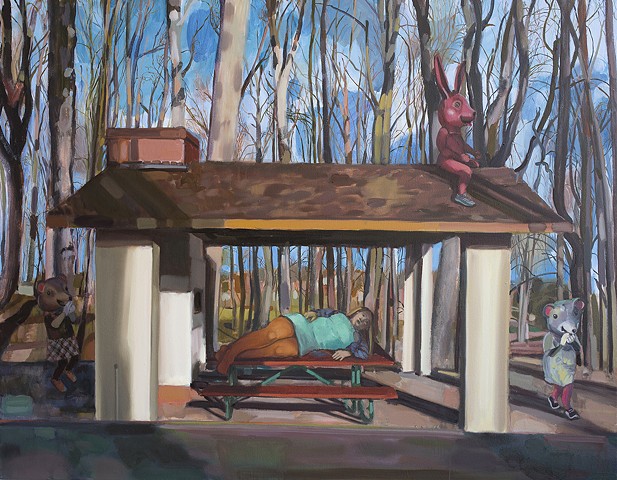 "Wysteria Ivy and the Woodland Creatures"
acrylic and oil on canvas
57.5" x 45" 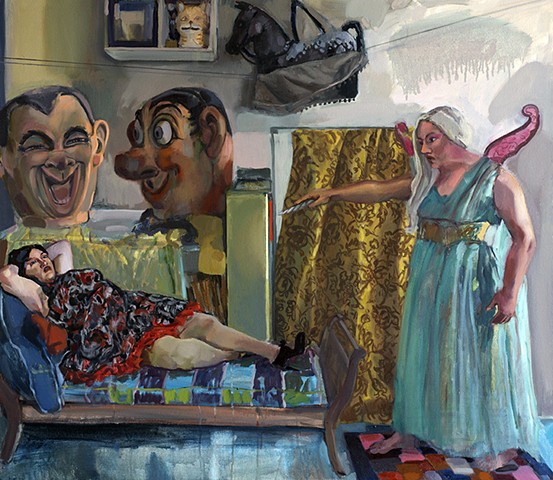 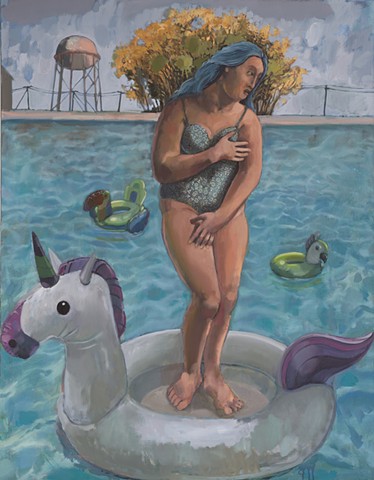 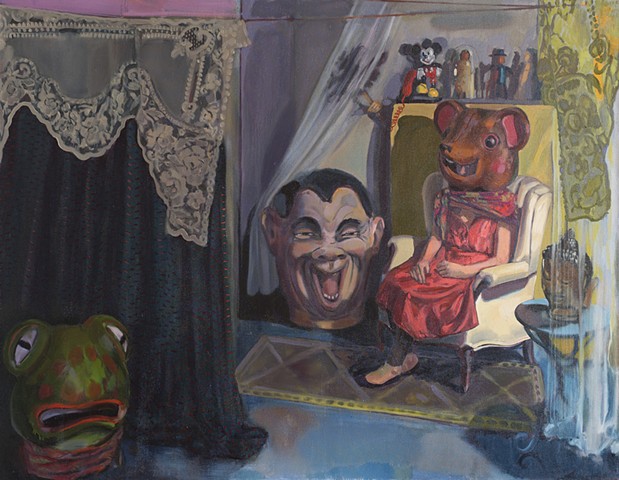 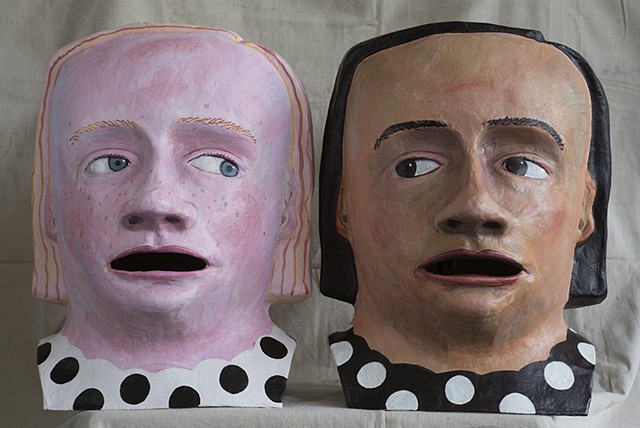 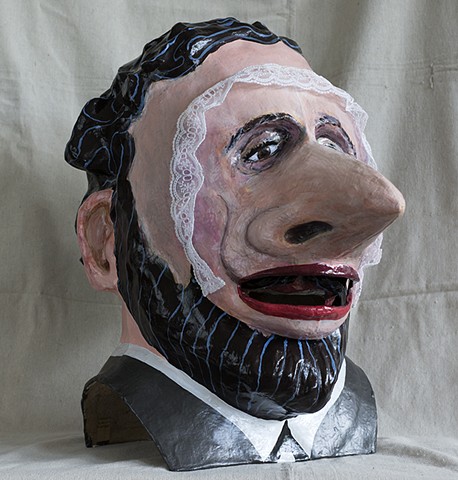 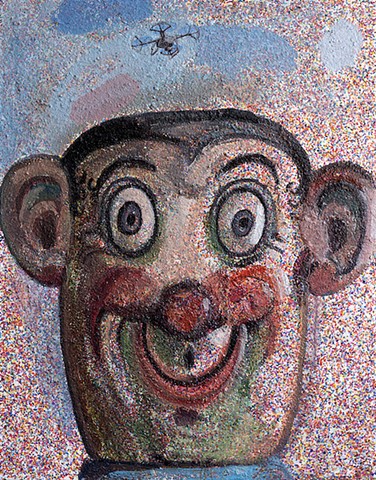 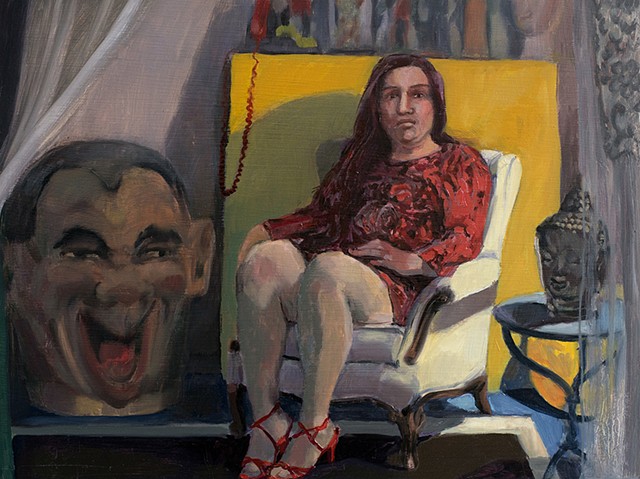 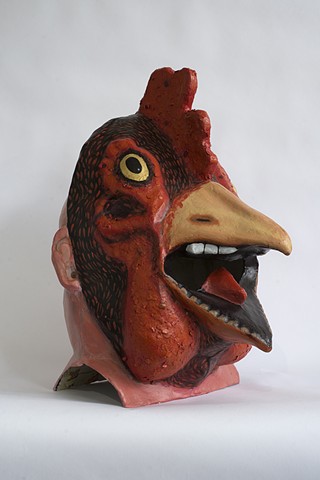 "The Self Conscious Artifact"
papier-mache'
24" high 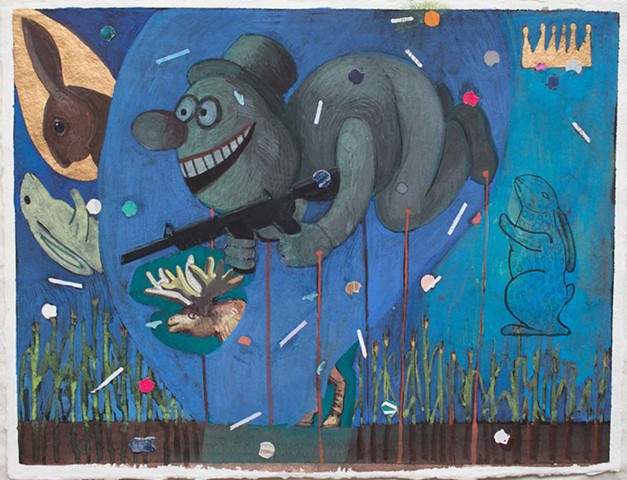 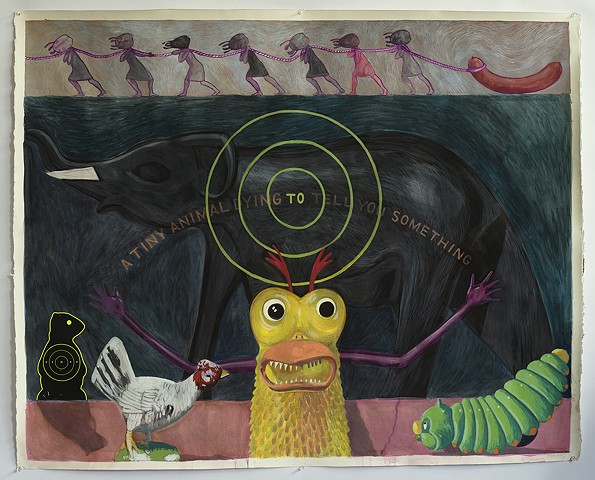 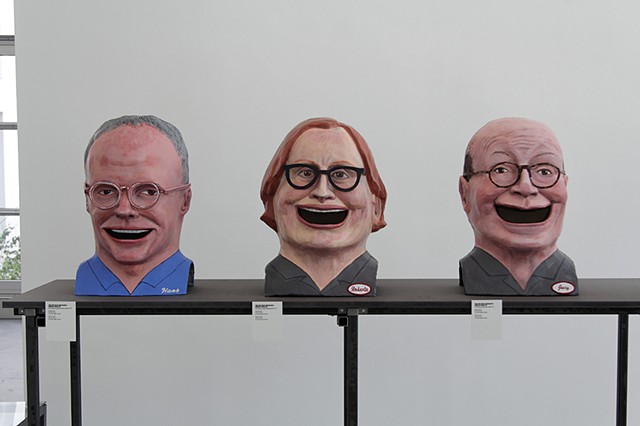 "The Critics at Large; Hans, Roberta, Jerry"
papier-mache'
24" high, each 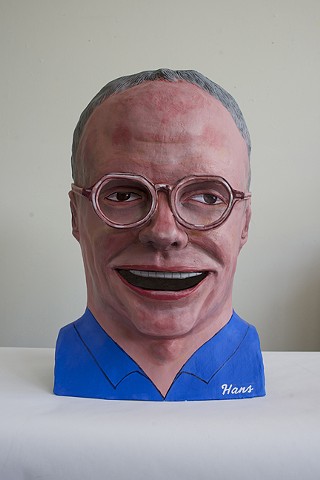 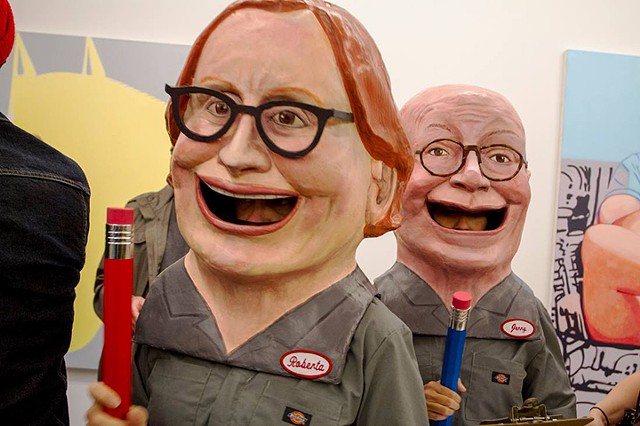 "The Critics at Large"
The Big Head Brigade
Cast papier-mache' 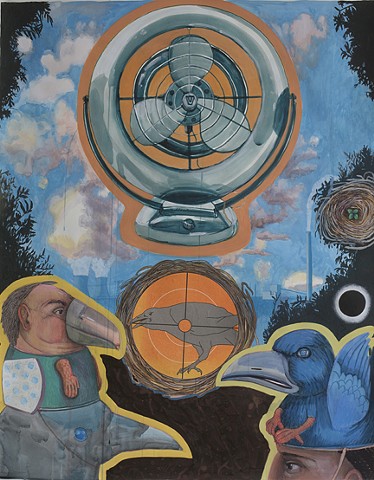 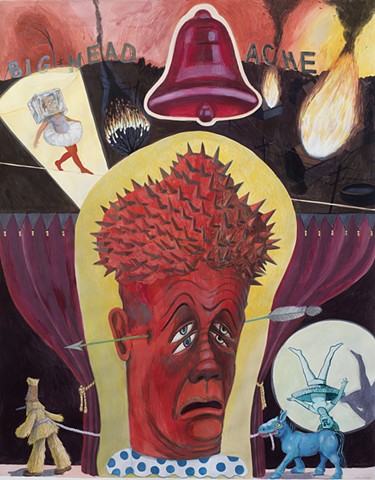 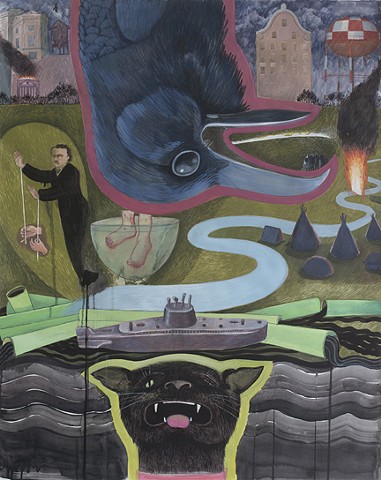 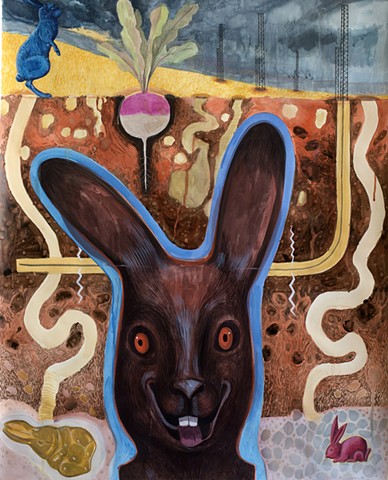 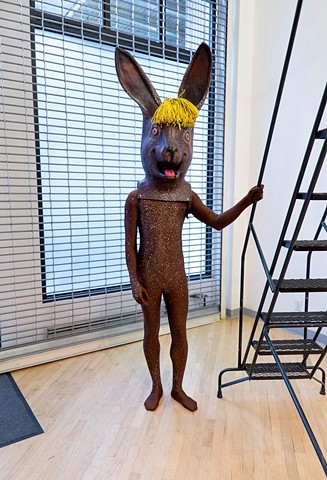 "The Hare, The Hair"
The Big Head Brigade
papier-mache 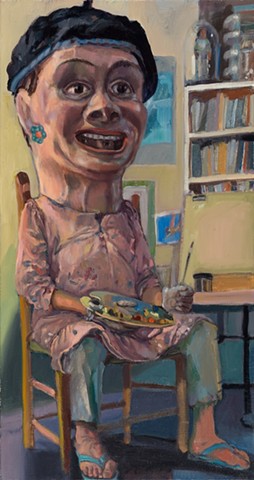 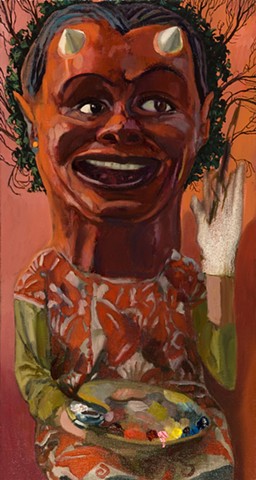 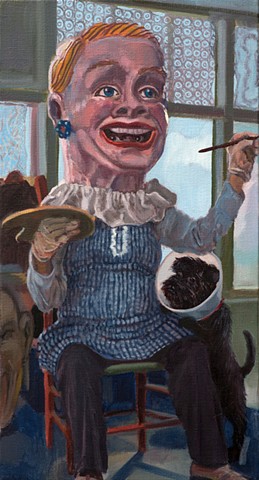 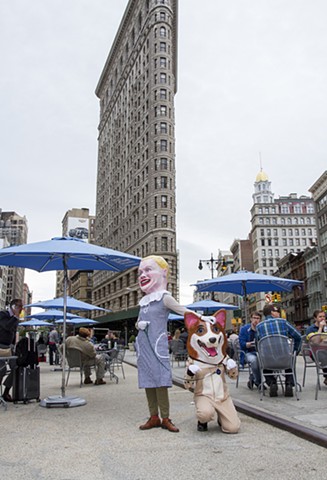 "If Dogs Run Free, Why Not We?"
The Big Head Brigade
Cast papier-mache' 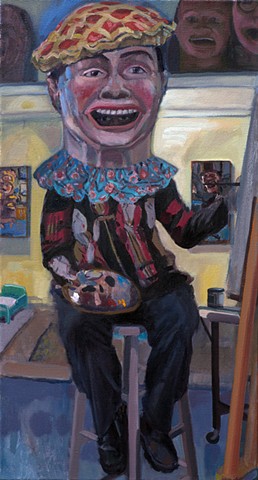 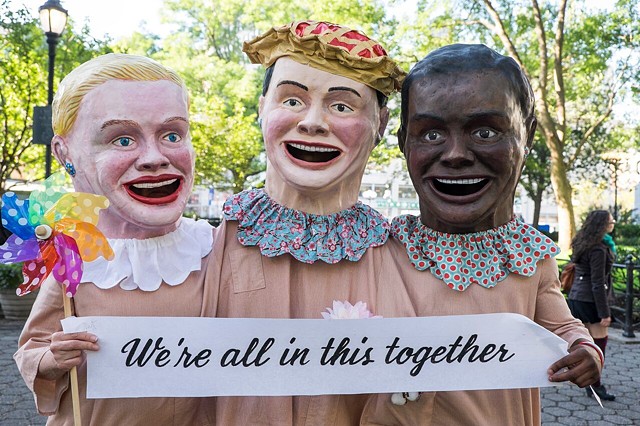 "3 Megans in One Dress"
The Big Head Brigade"
papier-mache

I am interested in the liminal; the space in between boundaries or at a threshold. Since I first learned to make big head masks, (or capgrossos), from the Catalonian folk artists Ventura and Hosta in 2012, I have studied the European tradition of pre-Lenten carnival, (including under a Fulbright Scholar Award to Belgium in 2018.) Most Americans think of amusement park rides and arcade games when they hear the word “carnival,” but I’m referring to an old event, evolved from Western pagan rituals and adapted into European Catholic and Protestant culture. It’s the same carnival Bruegel painted in “The Fight Between Carnival and Lent” nearly 500 years ago. When I see the present day Binche Giles of Belgium, the German Wild Men of the Alps, the Kukeri of Bulgaria or the Snap Critters of Northern Italy, I know the Western European culture that my art stems from is not as rational or objective as it pretends to be. Rooted in an ancient agrarian society dependent on the changing seasons, carnival’s time frame teeters between the weakening night force of winter and the strengthening day force of spring. Therefore, many carnival rituals across Western Europe involve shedding the evils of winter, waking up the icy earth and ushering in the fecund warmer months. It is in this liminal space and time between the changes of the seasons that a void in the universe exist and the magic of carnival emerges.

Part of that magic involves the borrowing of another’s persona through costume and mask wearing. Every culture across the globe has masks and they are the most transformative and empathetic of all human artifacts. They offer a masked performer the ability to climb into the skin of another being and see the other’s world from behind their eyes. While doing so, the mask erases all clues of the performer’s age, gender, species or race. Mummer events like carnival, festival parades, or theater offer the opportunity to transform oneself temporarily into another person or being. The focus is not on the single identity of an individual, but the flux and interchange of relationships. In this way, it forms a venue for empathy with others and an opportunity for sharing as a community.

Inside these liminal arenas, identities are not fully formed and opportunities arise to see beyond ourselves. This explains my work with Christopher. A friend, model and muse, Christopher is better known as Wysteria Ivy when in drag. Not to be confused with a trans-gendered individual, Christopher enjoys moving back and forth between the two sexes, wearing different personas, creating illusions with his/her body and being theatrical. He/She is a shape shifter, an in-between sex, and the embodiment of a liminal being. (Megan Marlatt is the founder and director of the artist collective, “The Big Head Brigade.” The Brigade has its own separate website at www.bigheadbrigade.com, and can also be found under the “Links” section of this website.)